Integration, orchestration, and mocking of APIs as a lightweight microservice.

Axway API Builder is based on Node.js, and acts as an integration orchestration layer between existing service providers and the API management system, or governance layer. 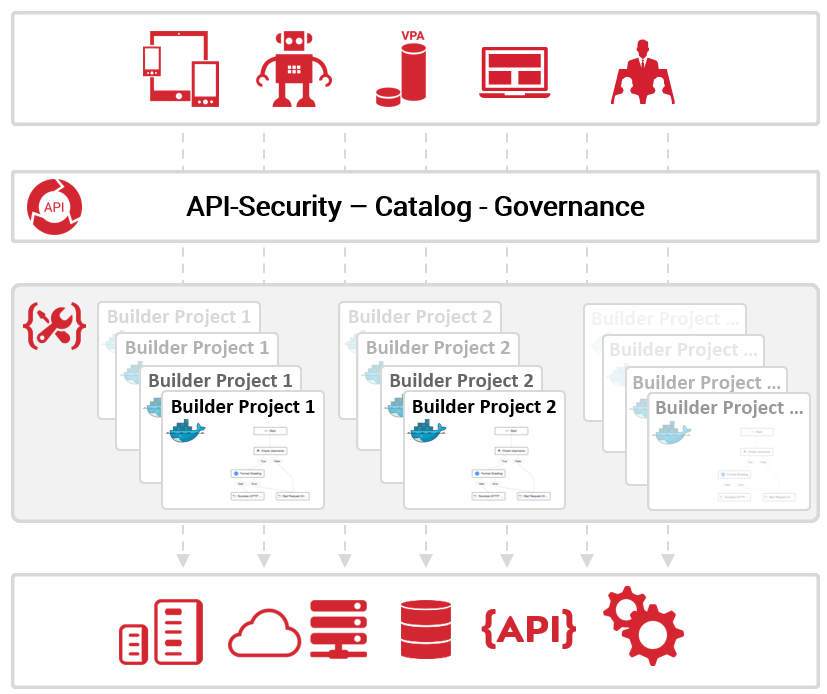 API builder is not an API Gateway or security component but an integration and orchestration layer. The APIs exposed by API Builder are typically imported into the API management solution as back-end APIs.

Connectors are the key in the model-based approach. Connectors have the task of generating a model from data sources such as databases. API Builder can generate a simple CRUD (create, read, update, delete) API for the model quickly and easily. With this approach, you can generate a CRUD API in minutes, and you can restrict it, for example, to read access only.

Watch this video to learn how to connect to a database and create a CRUD API based on it.

In the API-first approach, you import a defined API specification (OpenAPI/Swagger) into API Builder as the initial step. This tells API Builder what endpoint should be exposed, what parameters each endpoint has, and so on. The API specification might come from the API design phase where you have used your preferred API design editor. All endpoints are disabled by default and you can implement each endpoint with a flow using the plugins, connectors, and model you need for your use case.

Watch this vide to learn how to implement an API design using flows.

To mock an API with API Builder, follow the same steps as for the API-first approach and use the Create Mock option after you have imported your API specification.

Watch this video to learn how.

API Builder projects are designed to run as Docker containers in a scalable environment such as a Kubernetes cluster. Although API Builder supports a low code/no code interface, a Node.js application with a set of JavaScript and configuration files is created in the background. These should be versioned like any other application, built via a pipeline, tested, and published as a Docker image. Based on the image, the API Builder application is provided as a Docker container. The APIs exposed in this way are registered in the API management system as back-end APIs.