This includes creating a common project and API projects, adding the projects to an SCM system, and setting up project dependencies.

When to use team development

You should use team development if you have a large team of policy developers who need to work in parallel developing APIs and policies to be deployed as a single large API Gateway configuration.

When using team development you must:

The team development workflow requires you to split projects into separate pieces of configuration so that teams can work on them independently. If you do not have a requirement for multiple policy developers to work in parallel, you should not use a team development workflow. Instead you should use the previous workflows in Policy Studio where policy developers typically connect to a running API Gateway instance, download the configuration, make desired changes, and then deploy the configuration back to the API Gateway. This approach encourages use of API Gateway as a design-time repository for policies, in addition to as the runtime for executing policies. This workflow still requires you to create a project in Policy Studio, but there is no requirement to split the project into separate pieces of configuration, as in the team development workflow.

If you have a large API Gateway configuration, you might need to increase the memory allocation in Policy Studio. You can do this by increasing the value of the Xmx setting in the following file:

The default value is -Xmx768m.

Create projects and dependencies for new or existing deployments

Break up existing configuration into a common project and API projects

If you have an existing deployment, you must break up your existing monolithic API Gateway configuration as follows:

The following sections describe how you can do this.

Create a common project that contains shared resources used by multiple APIs. For example, your common project might contain a corporate security policy that must be applied to all APIs. Your configuration can contain only one common project with server settings.

To create a common project, perform the following steps:

The following example shows a common project containing Authentication and Authorization policies that were exported from an existing configuration and imported into the common project. 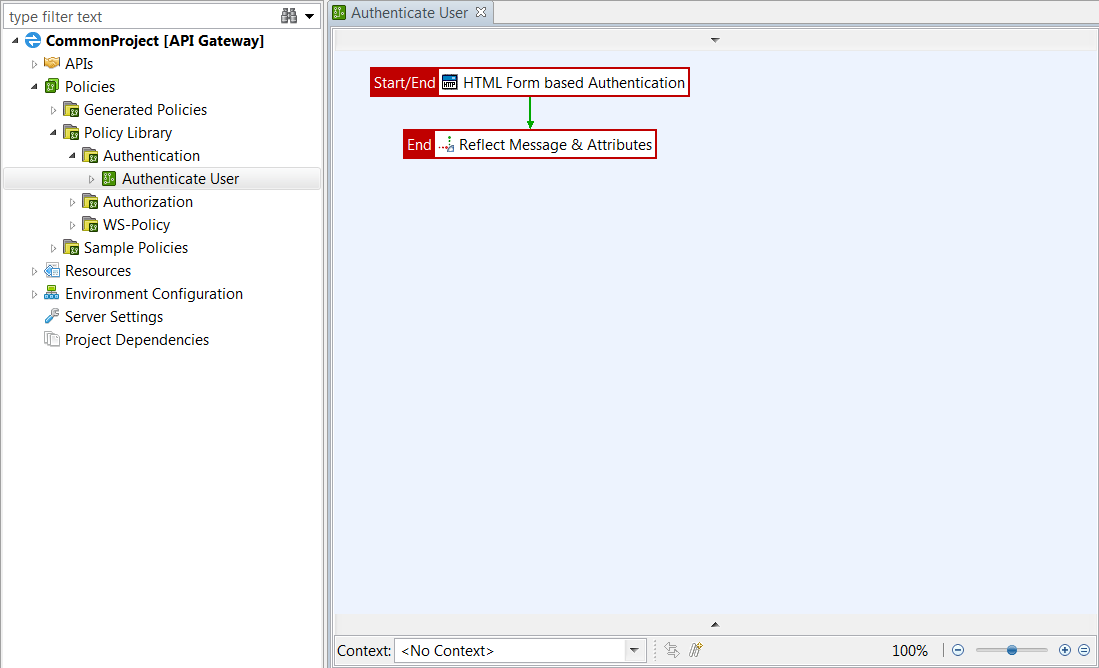 Create API projects that contain resources that are specific to an API and not shared with other APIs. Your configuration can contain multiple API projects.

You now have one common project, and separate API projects for each API, all stored locally. You must add your API Gateway project files to your SCM system before you start adding project dependencies in Policy Studio.

For example, using Git, an administrator creates a master repository for API projects. Policy developers can clone this master repository to their own local machine. They then create projects and commit to their local repository. When appropriate, they can push to the master repository. They must always perform a pull before a push request to ensure they get the latest from master and resolve any conflicts.

To create project dependencies between a common project and an API project, perform the following steps: