You can convert common and API projects, created using Policy Studio Team development functionality, into YAML configurations in the same way as any other XML federated configuration. The converted YAML projects will validate successfully, but they might need the --allow-invalid-ref option to pass validation because some of these projects might contain entities that reference entities in another project.

You can use the projdeploy tool with YAML configuration, but it requires a YAML .tar.gz file built using standard tooling. The design of the YAML configuration lends itself well to Team development for many use cases. The natural split of the configuration into separate files allows multiple developers to make changes on the same YAML configuration project without causing merge conflicts. The conflicts that do occur, are more easily understood and resolved as files are smaller and more human readable.

It is still necessary to support multiple YAML configuration projects for reuse purposes. Developers might want to develop policies once and reuse many times in other projects. For example, a company might have some common security or throttling policies that they wish to apply across all projects. Such policies can be developed once and imported into other projects at deployment time through a CI/CD pipeline. You can import many common projects into your main project before deployment by using the yamles import command multiple times.

The following example shows how a merged .tar.gz file can be created for deployment from two separate projects. Let’s assume our starting point is a pair of projects that were created in XML format in Policy Studio using the Team Development templates, one using the Common Project and the other using the API Project. 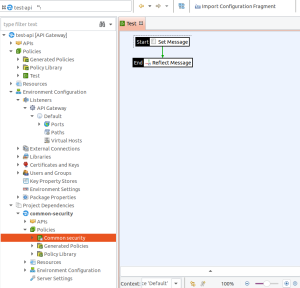 Both projects can be converted separately to YAML using the yamles fed2yaml option.

They may be separately validated as follows:

Note the use of --allow-invalid-ref for the test-api project as it has a reference to an entity in the common-security project in the System/Global Properties.yaml file:

CI/CD pipelines for the common-security and test-api projects might each publish a .tar.gz into Artifactory. These need to get merged before deployment using the yamles import command.

Currently, the import command does not support project dependencies in the same way as XML. You must ensure the final project has all references resolved. This can be verified using the yamles validate command. The ordering and use of addIfAbsent and addOrReplace in the _fragment.yaml file determines how to resolve conflicts.