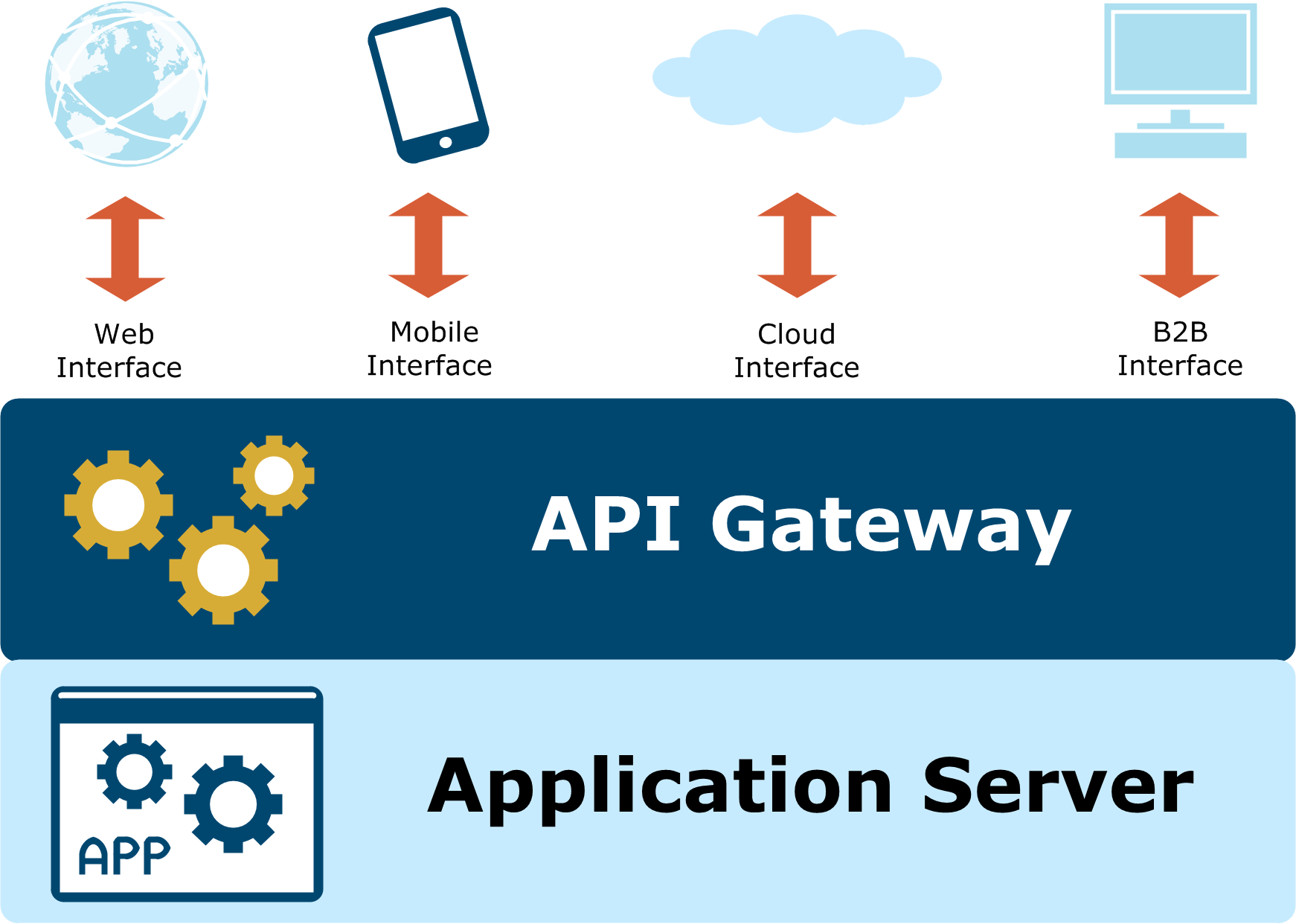 The API Gateway can be seen as the API runtime environment, which provides core services such as the following:

The following overview diagram shows the range of transports and protocols supported by API Gateway on the left, and the services that it provides on the right: 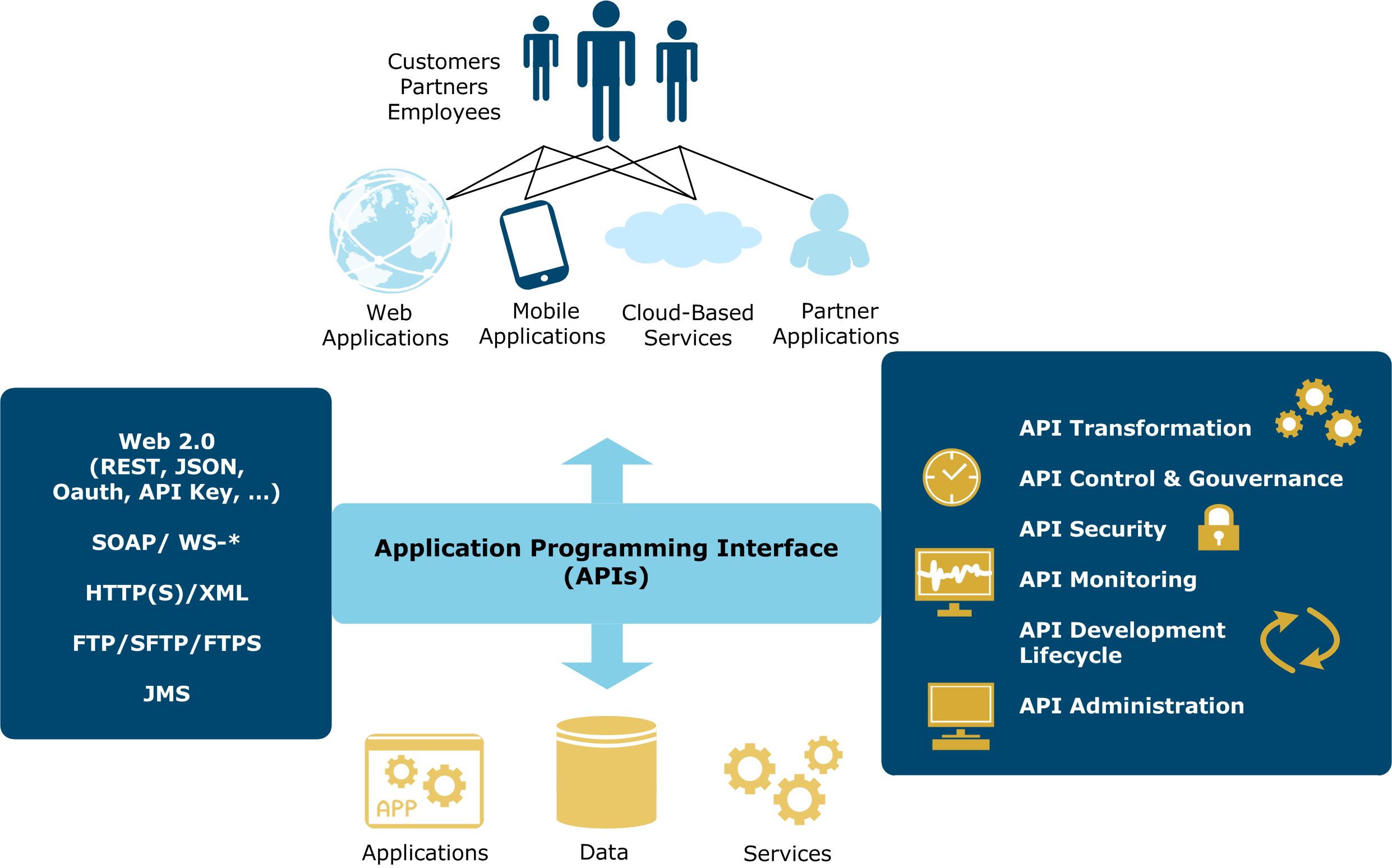 The main services supported by API Gateway are described in this section.

The API transformation features include the following:

The API control and governance features include the following:

The API security features include the following:

The API monitoring features include the following:

The API administration features include the following:

The API Gateway internal message-handling pipeline is extensible, enabling extra access control and content-filtering rules to be added with ease. Customers do not have to wait for a full product release before receiving updates of support for emerging standards and for additional adapters.

The API Gateway REST support enables you to make enterprise application data and operations available using Web APIs. For example, you can convert a legacy SOAP service, and deploy it as a REST API to be consumed by mobile apps. REST-to-SOAP conversion is easy to achieve using the API Gateway. It can expose REST APIs that map to SOAP services, dynamically creating a SOAP request based on the REST API call.

API Gateway includes support for multi-byte message data and a wide range of international languages and character sets. For example, this includes requests in languages such as Chinese, German, French, Spanish, Danish, Serbian, Russian, Japanese, Korean, Greek, Arabic, Hebrew, and so on. The API Gateway supports character sets such as UTF-8, KO-I8, UTF-16, UTF-32, ISO-8859-1, EUC-JP, US-ASCII, ISO-8859-7, and so on.

The core acceleration engine is integrated into API Gateway to accelerate the essential XML security primitives. This engine provides XML processing at faster levels than those performed by common JAXP implementations in application servers and other applications that sit downstream from API Gateway. The acceleration engine performs Document Object Model (DOM) processing, XPath, JSON Path, XSLT conversion, and validation of XML and JSON.

API Gateway includes many features that speed up deployment. For example, certificates and private keys, necessary for XML security functions, are issued on board. API Gateway has a deny-by-default defense posture, to detect and block unauthorized deployments of services. Policies can be re-applied across multiple endpoints using simple menus. Policies can also be imported and exported as XML files. This minimizes time needed to replicate policies across multiple API Gateways, or to move from a staging system to production environment.

The Policy Studio tool enables administrators to add security and management policies to the API Gateway, and to manage policy versions across multiple API Gateways. This enables enterprise policy management to be brought under centralized control, rather than be managed separately on each API Gateway.

Through its support for a wide range of security standards, API Gateway enables identity mediation between different identity schemes. For example, the API Gateway can authenticate external clients by user name and password, but then issue SAML tokens that are used for identity propagation to application servers.

API Gateway enables you to secure Web APIs against attack and abuse. It also enables you to govern and meter access to and usage of Web APIs. API Gateway provides support for API management security standards such as OAuth. This enables you to share private resources with third-party websites without needing to provide credentials.

API Gateway routes data based on sender identity, content, and type. This enables messages to be sent to the appropriate application in a secure manner. It also enables service virtualization, where services are exposed to clients with virtual addresses to mask their actual addresses for security and application delivery. In this way, the API Gateway acts as an important control point for network traffic by shielding endpoint services from direct access.

API Gateway satisfies audit requirements by enabling service transactions to be archived in a tamper-proof store for subsequent audit. It also facilitates privacy compliance support by allowing sensitive information, such as customer names, to be encrypted or stripped out of message traffic.

API Gateway is available as software on Linux, or container deployment on Docker. A limited set of developer tools is available on Windows, but the API Gateway server does not support Windows. 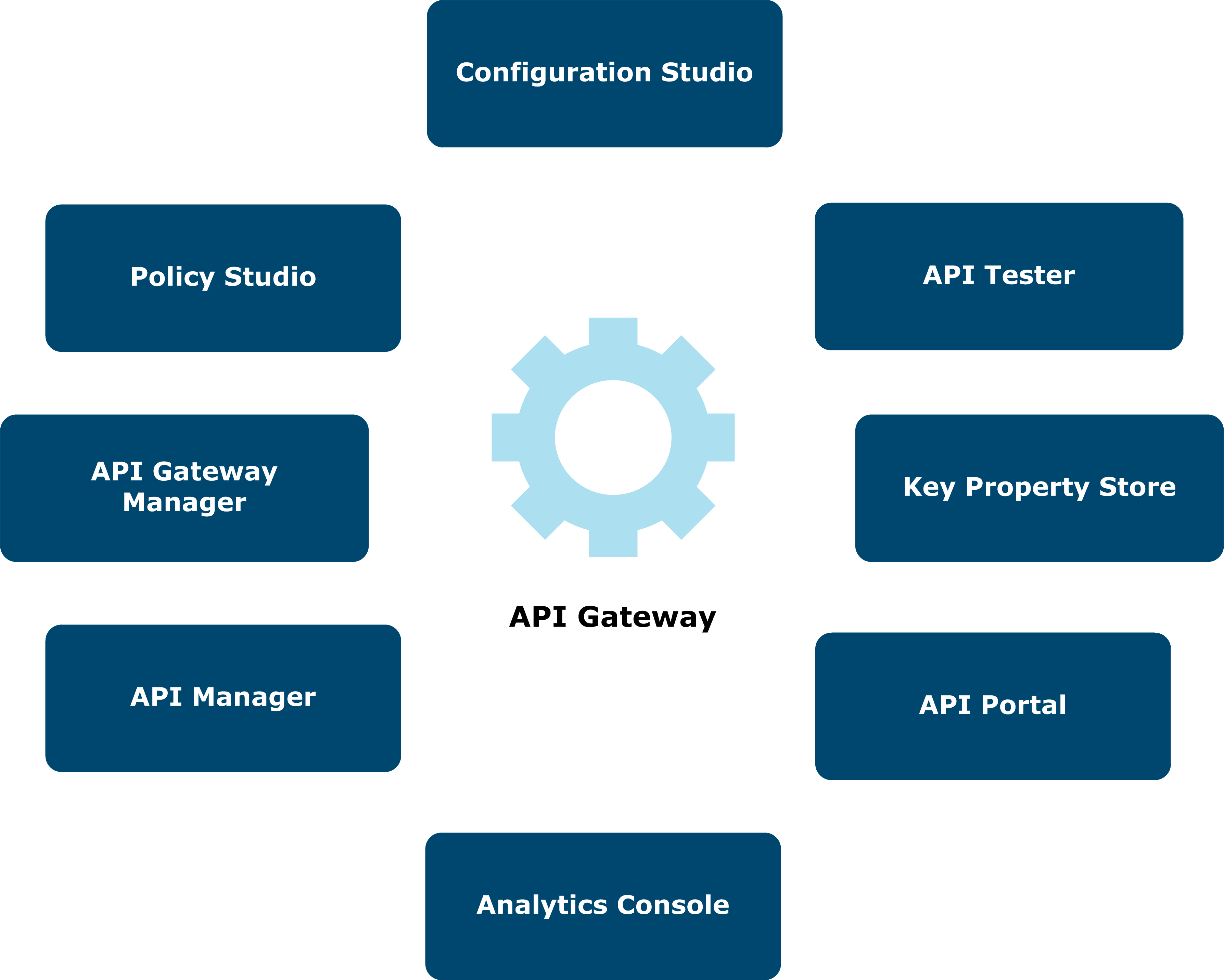 The central API Gateway core component is described as follows:

In enterprise organizations, the API Gateway is typically deployed in the DMZ between the public Internet and private intranet.