Deploy API Portal in Docker containers and learn how to upgrade a container deployment.

Docker containers are software containers that wrap software in a complete file system containing everything the software in question needs to run properly, such as code, runtime, system tools, and system libraries. This guarantees that the software always runs the same way, regardless of environment. In addition, you can configure several containers to run on a single host machine, without the overhead of starting and maintaining separate virtual machines.

For details on how to deploy your Docker infrastructure in the cloud, see the product documentation for your chosen third-party cloud platform or Platform as a Service (PaaS) environments, such as Amazon Web Services.

For more details on Docker, see the following:

The following diagram shows an example on how the different components interact in Docker containers: 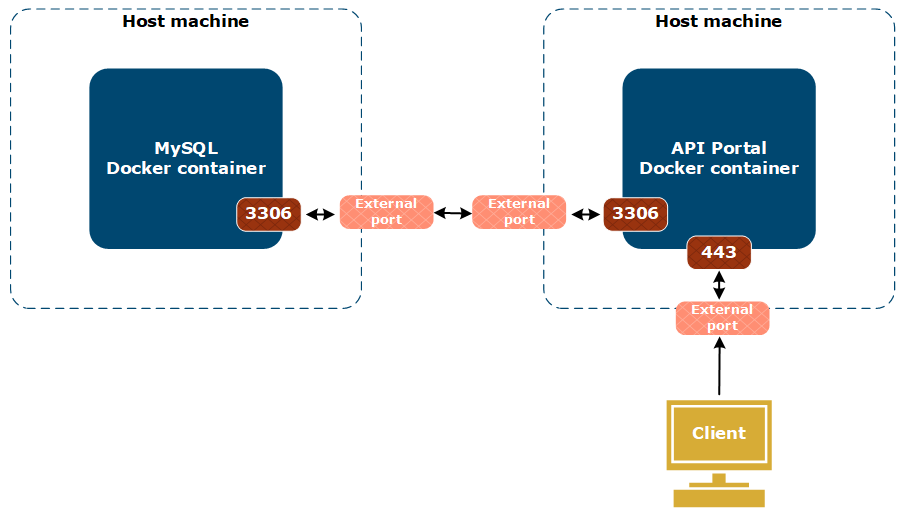 By default, API Portal uses port 3306 for the MySQL connection and ports 443 and 80 for http. To use different ports on the Docker containers, you can replace the default values in the code examples with your chosen ports. Ensure that you define the same MySQL port in both the MySQL and API Portal container. Additional configuration might also be required.

On the host machines running the Docker containers, you can expose any port you want. The examples in this guide use ports 443 on the API Portal host machine and port 3306 on the MySQL host machine.

Axway provides a package containing a ready-made API Portal Docker image for running API Portal in Docker. You can get the API Portal packages from Axway Support.

When you make changes that affect the file system of the API Portal container, such as customizations (template, logo), it is recommended to back up these changes.

Data is persistent as long as the Docker container exists:

By default, API Portal container runs as a non-root container, which makes containers more secure but results in some volumes-related issues. For more information, see the data persistence section.