This feature enables a team of API Gateway policy developers to work in parallel developing APIs and policies to be deployed as a single API Gateway configuration using a Source Code Management (SCM) system.

In addition, team development enables continuous integration (CI) and continuous delivery (CD) practices to be used in an API Gateway system. This enables the API Gateway to use best practices for development, deployment, and promotion, and to support the increasing use of DevOps tooling.

The following diagram shows the different stages of delivery, from development through to deployment.

The following details the various tasks that you might perform at each stage.

Policy developers develop and test individual API projects and a common project in a local development environment. These projects must be managed and versioned in a SCM system. 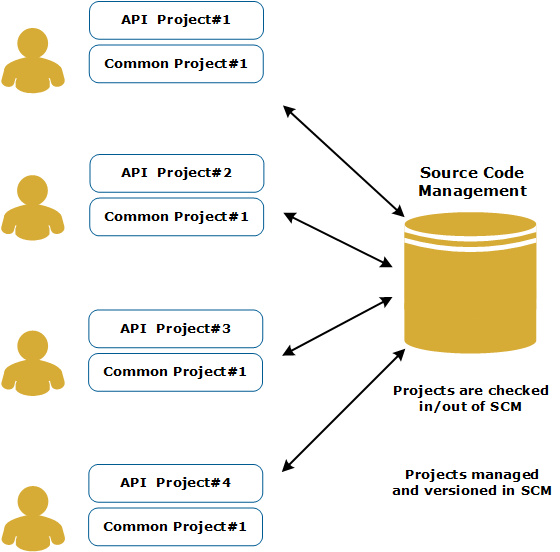 An API developed on the API Gateway consists of a set of resources developed in Policy Studio:

All these resources are specific to the API, and not shared with other APIs. Therefore each API can be packaged as a standalone API project with no dependencies on other API projects.

For example, if an API Gateway deployment consists of 100 APIs, and a common set of corporate security policies, the configuration will be organized as 100 API projects, and a dependent project containing the common security policies.

Use of a SCM system is required as the system of record for managing and versioning projects. Projects are the granular unit of configuration that is managed and versioned in the SCM. This enables a version history of APIs to be maintained in the SCM, and allows policy developers to roll back to previous versions of an API.

The SCM also maintains an audit trail of changes to individual projects, allowing organizations to determine who changed what and when. In addition, the SCM can be used to control what level of access individual policy developers have to specific projects. 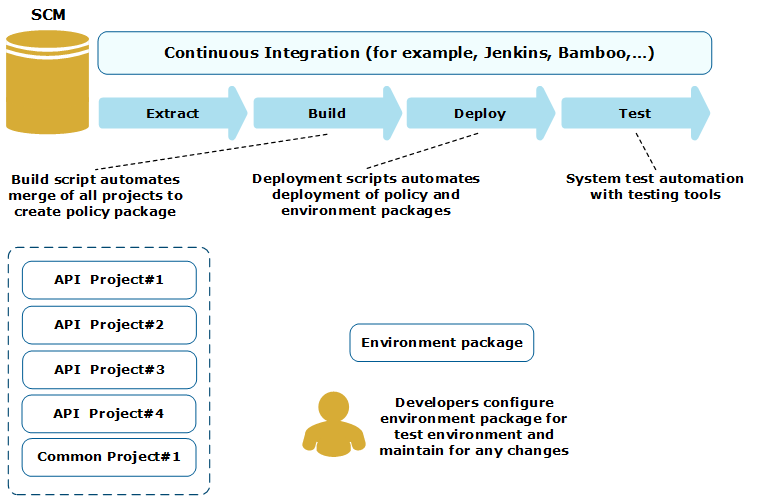 The CI process can be automated using DevOps tools such as Jenkins. For example, when an updated API project is checked into the SCM, a job is kicked off that builds the policy package, deploys the policy and environment packages to the test server, and runs a suite of tests.

This section explains how to resolve conflicts between and within API Gateway projects.

Occasionally, there might be a conflict between projects due to a clash of resource naming, and this will be detected by the build script (projpack). If two policy developers working on different API projects create a resource of the same type with the same name in their respective projects, a conflict will occur.

The projpack script detects most conflicts between projects, however, it cannot detect conflicts between projects containing different REST APIs with the same name. For example, if projectA and projectB both have a REST API named TestAPI, and this REST API contains method1 and method2 in projectA, and in projectB it contains method3 and method4, projpack succeeds in merging the projects with no conflicts, but the resulting .fed file is corrupt. You must ensure that you do not have two different REST APIs with the same name in different projects.

Fred must now resolve this conflict by merging his changes with Joe’s, and checking the dependent project back in as v3. To perform this, Fred will check out Joe’s v2 from the SCM, and then use Policy Studio to compare and merge the two project versions to create the v3. Policy Studio enables you to compare two configurations to identify the differences between them.