The OpenID Connect 1.0 (OID) protocol is a simple identity layer on top of the OAuth 2.0 protocol. OAuth 2.0 provides an access authorization delegation protocol, and OpenID Connect leverages OAuth features to allow authorized access to user authentication session APIs in an interoperable manner. OpenID Connect uses a REST interface and simple JSON assertions called JSON Web Tokens (JWTs) to provide identifying claims about users. The protocol is designed to be API-friendly and adaptable to multiple formats such as web and mobile, and it has built-in provisions for robust signing and encryption.

In its simplest form, an OpenID Connect deployment allows applications (such as browsers, mobiles, and desktop clients), to request and receive information about a user’s identities. This allows the user to authenticate to a third-party application that acts as a relying party (RP) using an identity established with the OpenID Connect identity provider (IdP).

To support maximum interoperability, the OID specification defines standard scopes, defined request objects and corresponding claims, the ID token format, and a UserInfo endpoint. These features represent the primary additions to the OAuth 2.0 standard and should be available across all IdP implementations of OpenID Connect. 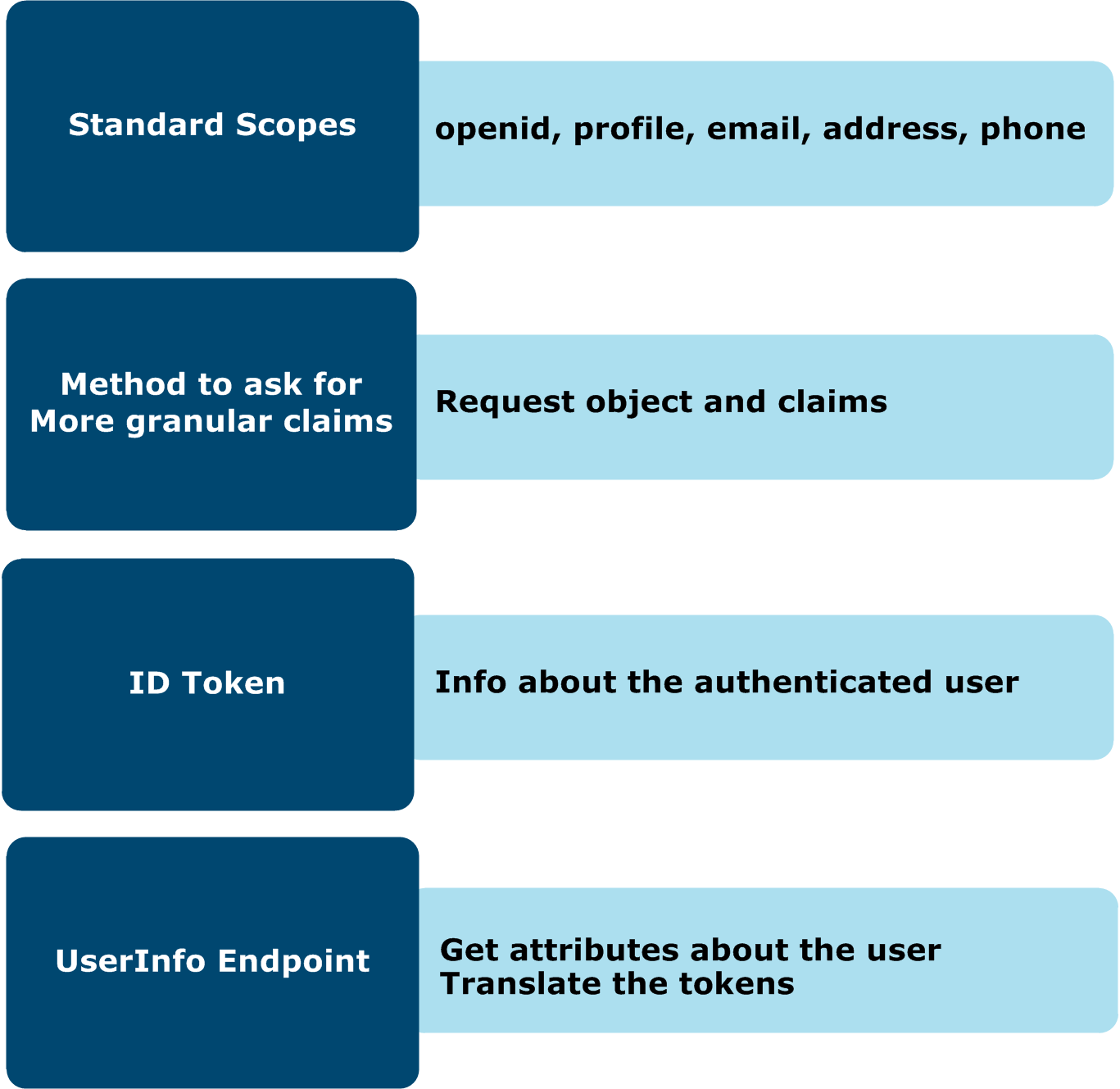 The following scopes are not directly catered for in the OpenID Connect filters, but are made available on the message so that policy developers can correctly respond to them in policies. They differ to OAuth 2.0 scopes in that they do not need to be expressly associated with a resource or API, and are automatically considered valid scopes for client applications. However, these scopes can be considered regular OAuth 2.0 scopes when accessing the UserInfo endpoint, and if they are present in the access token, policy developers can construct an appropriate claims response.

The ID token is a JWT-based security token that contains claims about the authentication of an end user by an authorization server. When using the authorization code flow the ID token is returned as a property of the access token.  For the implicit and some hybrid flows the ID token is returned in response to the authorization request. As an IdP, API Gateway will produce an ID token using the Create ID Token filter, either in the authorization endpoint policy or the token endpoint policy. This token will be signed for verification by the client and can include user defined claims. This provides flexibility in creating claims from any user store. Acting as an RP, a client can verify a received ID token with the Verify ID Token filter. This should be done in the callback policy as API Gateway does not support implicit flows as a client. After being verified, the ID token can be used to look up or create a user record and create an authenticated session for the user.

The UserInfo endpoint is defined as an OAuth 2.0 protected resource that returns extended claims about the authenticated end user. To access this resource an API Gateway acting as an RP must use the access token received in the OpenID Connect authentication process. A successful request will return a JSON object with the claims for the user. As an IdP the implementation of the UserInfo endpoint should be similar to any OAuth protected resource with a minimum scope requirement of openid. The implementation of this endpoint is deliberately left open for policy developers to integrate their own authentication stores.

The OpenID Connect process follows the OAuth 2.0 three-legged authorization code flow (see Authorization code grant (or web server) flow), but with the additional concepts of an ID token and a UserInfo endpoint.

The authorization code flow consists of the following steps:

On successful completion of these steps the user can be considered authenticated in the relying party’s application. At this point the client application can make a request for further claims and, if required, create a local record of this user for future use, or retrieve a previously created user record.

The following diagram illustrates these steps. 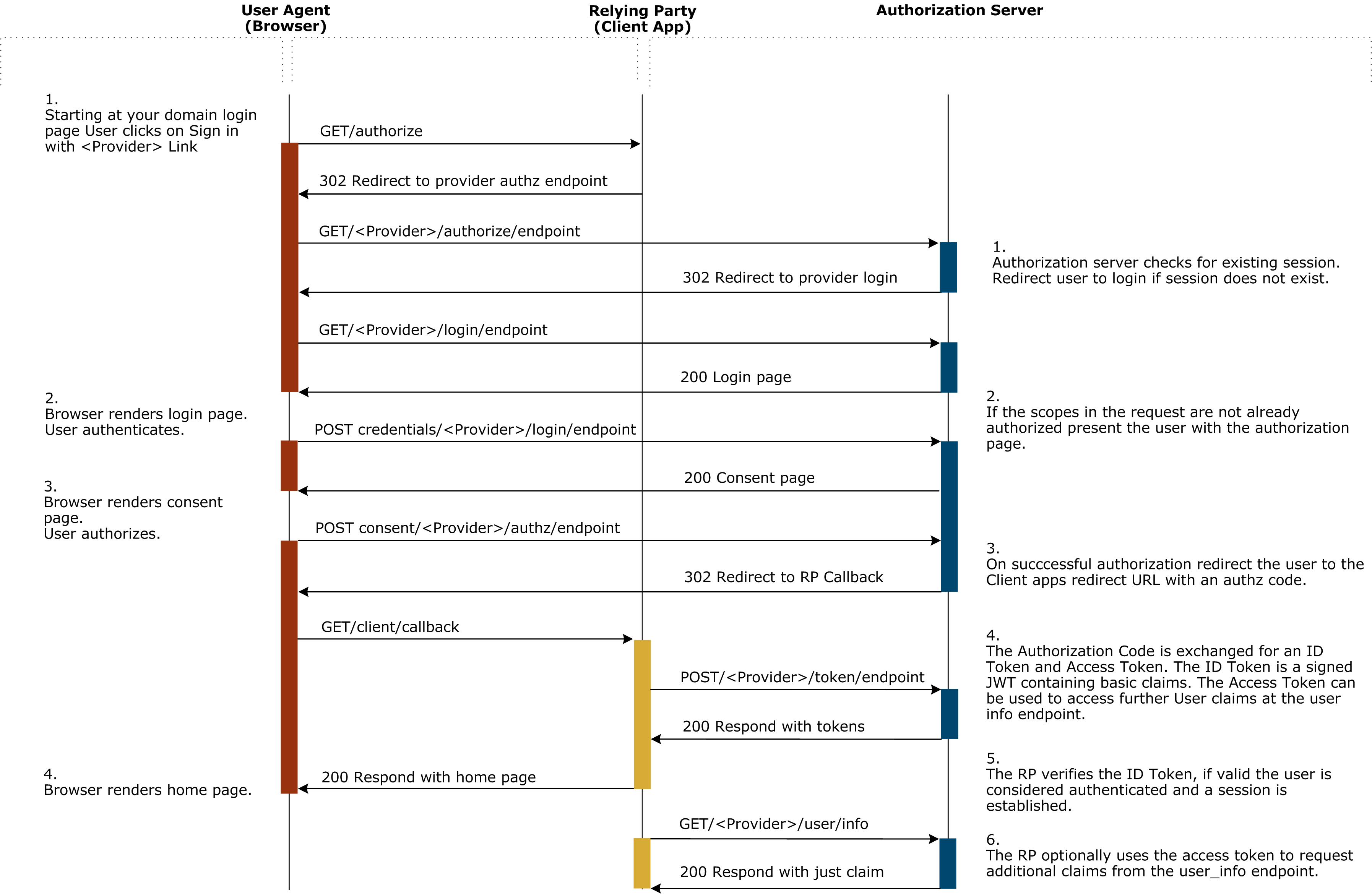 To use the OpenID Connect features of API Gateway, the following are required:

To build an IdP server on top of an existing OAuth deployment, follow these steps.

Building a simple OpenID Connect client involves adding only one additional step to the OAuth authorization code flow for an OAuth client.

If the ID token is successfully verified, the filter passes and the following message properties are created:

The policy designer can decide how best to use these properties. For example, the subject could be used to look up a local user store to see if there is an existing relationship with the user. If there is no existing user, the claim could be used to generate a new user record for future use. At this point, the user can be considered authenticated and a new session can be created. If an access token was returned it can be used to retrieve additional claims from the IdP’s UserInfo endpoint.