Overview of the elastic deployment process and an example containerized topology.

Deploy API Gateway and API Manager in Docker containers on a cloud platform hosted by infrastructure-as-a-service (IaaS) providers, and use the elastic capability that their automation tools and techniques provide. This enables you to manage the load on your system easily, adding and removing nodes as needed.

To deploy your API Gateway or API Manager topology in containers, you must have an automated continuous integration (CI) pipeline spanning all your environments from development to production. The CI pipeline moves a Docker image from one environment to another. However, the image is always specific to a single environment, and you use the promoted image as the base image when creating the Docker image. You must update the configuration files to match the configuration of the environment (for example, certificates, ports, and back-end URLs often change between environments). If you are using API Manager, during promotion APIs are exported from the previous environment, environmentalized, and imported into the new environment.

You can download Docker scripts for API Gateway and Admin Node Manager from Axway Support, and use these scripts to create the Docker images. You can then include your .fed and other configuration files in the API Gateway base image in your development environment to create a customized API Gateway Docker image.

Because the .fed files are not separately deployed but included in the Docker image, after the image is created, it is immutable. However, you can create multiple Docker images with different .fed files as needed, and deploy them as required. Containers from each image (containing the same .fed file) form a group that scales independently from other groups, and you can use a load balancer to route traffic from one group to another.

In the classic, non-containerized deployment, the topology is managed internally through an Admin Node Manager communicating with Node Managers in API Gateway nodes.

However, in a container deployment the topology is externally managed. Instead of the Admin Node Manager, a cluster manager, such as Docker Swarm or Kubernetes, manages the topology and communicates directly with each API Gateway. The API Gateway Docker images do not include a Node Manager.

The following diagram shows an example of the topology in container deployment: 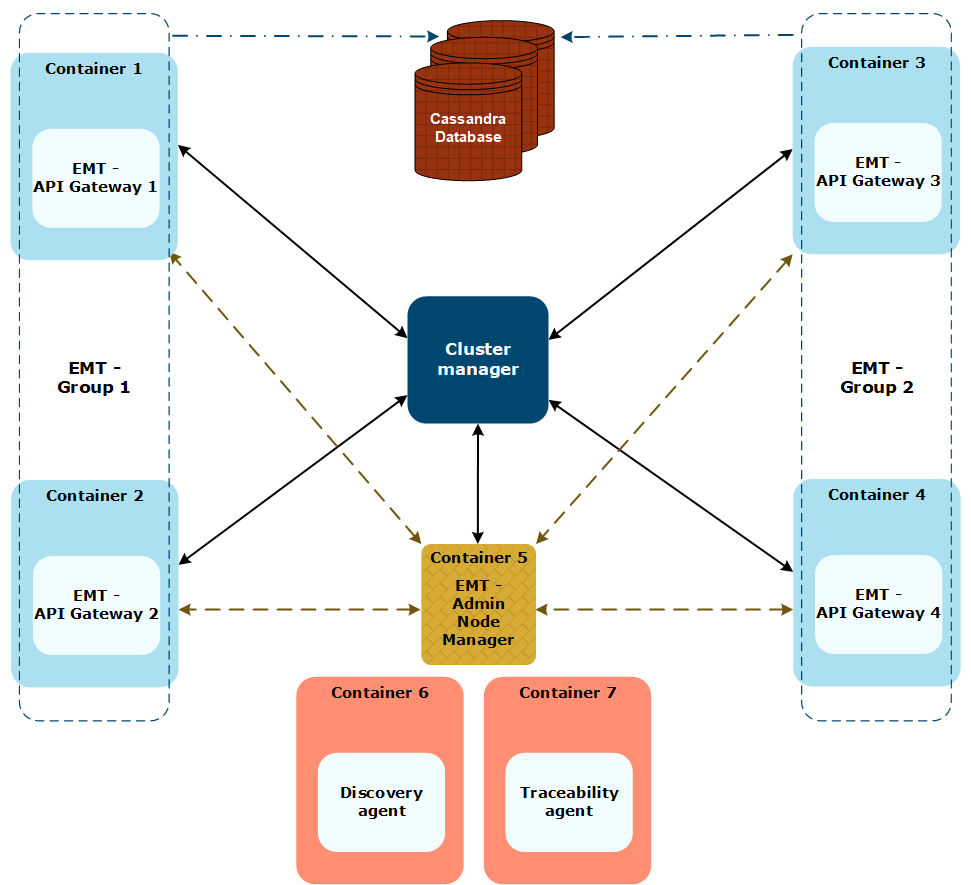 The topology includes an Admin Node Manager, but with a different role than in the classic deployment:

A cluster manager such as Docker Swarm or Kubernetes manages the topology and adds or removes nodes as the load on the system changes: