Different approaches you can use to promote APIs between environments.

When APIs have been registered in API Manager, you can promote them directly between environments using the API Manager export and import mechanism. This exports registered APIs in JSON format, which you can then import into API Manager as required.

Alternatively, you can use one of these approaches:

Another alternative is to use the apim-cli tool to follow an APIs as code approach. Store your API definition (Swagger or WSDL) plus a meta data configuration file in your version control system, and a CI/CD pipeline replicates it into API Manager in the state you want. For details, go to apim-cli tool on GitHub.

The apimanager-promote script enables you to:

How to use the apimanager-promote script

When using the apimanager-promote script, the high-level steps are as follows:

You must specify the target environment that you wish to promote into, your API administrator credentials, along with your source API data files and promotion properties file. For example:

The path/to/my_api_data directory must include the exported .dat file for the source APIs (and optional applications if exported) and your promotion.properties file.

You can specify the following command options:

You must create a promotion.properties file to specify options for the APIs and applications to be promoted. For example, this enables you to specify how to manage any conflicts and an optional virtual host for the target environment.

You can use the apimanager-promote --template command to generate a default properties file, which you can then customize as needed. For example:

You must ensure that the target organizations specified in the promotion.properties file already exist in that instance before running the apimanager-promote command.

The promotion properties are described as follows:

After running the apimanager-promote command, press F5 to reload the API Manager web console in the target environment.

If you use a custom promotion policy, you must also promote this policy as part of the standard API Gateway configuration. For more details, see Promote APIs developed in Policy Studio.

You must first create your custom promotion policy in Policy Studio to import APIs into a target environment. For example, the following promotion policy is based on the proxies/import method provided in the API Manager REST API: 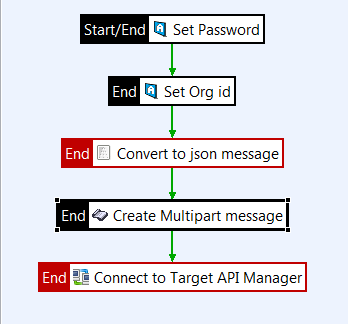 This policy imports a previously exported API as follows:

You can also use the Set Attribute filter in your promotion policy to configure the errorMessage message attribute with a meaningful error message. For example, when used in conjunction with a False filter, this message can then be displayed in API Manager if the API promotion policy fails.

When you have configured and deployed a promotion policy in Policy Studio, you must also then enable the policy in API Manager. You can do this by selecting Settings > API Manager settings > API REGISTRATION > API promotion via policy. A Promote API option is then added to the Frontend API management menu when you log in again.

In a production environment, enterprises should create and deploy the following separate API Gateway groups:

This section shows an example production environment topology with Sandbox and Production API groups, and shows examples of promoting and onboarding Sandbox APIs to Production APIs.

The following diagram shows the environment topology in a typical production domain. This environment topology includes two separate API Gateway groups, each of which includes two API Gateway instances with API Manager deployed on each, and its own Client Registry and API Manager. This enables the message traffic for the Sandbox API and the Production API to be kept separate. 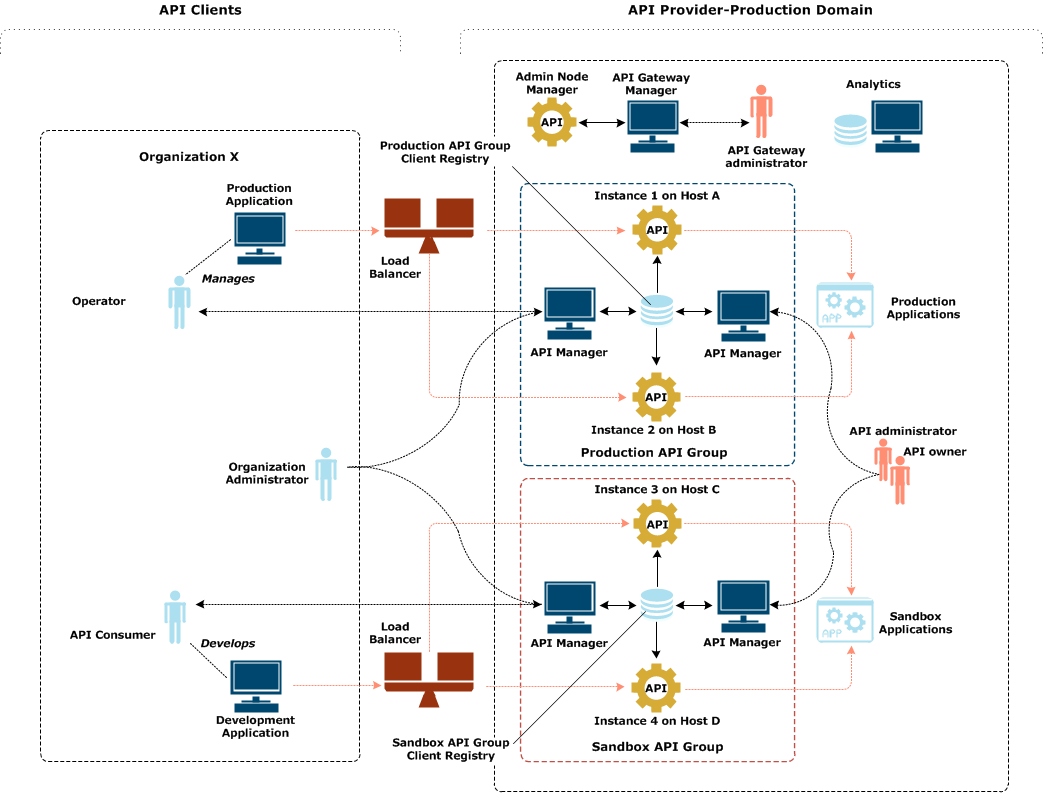 The following diagram shows the process of promoting API Gateway policy-based configuration from the downstream environment (for example, development or testing) to both the Sandbox API and Production API groups in the production environment.

Both the Sandbox API and Production API groups are virtualizing the same APIs and therefore must use the same policy package (.pol). During configuration promotion, the policy package from the downstream environment (for example, testing) is copied and deployed to both API groups.

However, both API groups use different environment specific configuration (for example, to connect to different back-end systems, which require different connection information). Therefore each API group has a specific environment package (.env) that is deployed to the API group along with the common policy package. 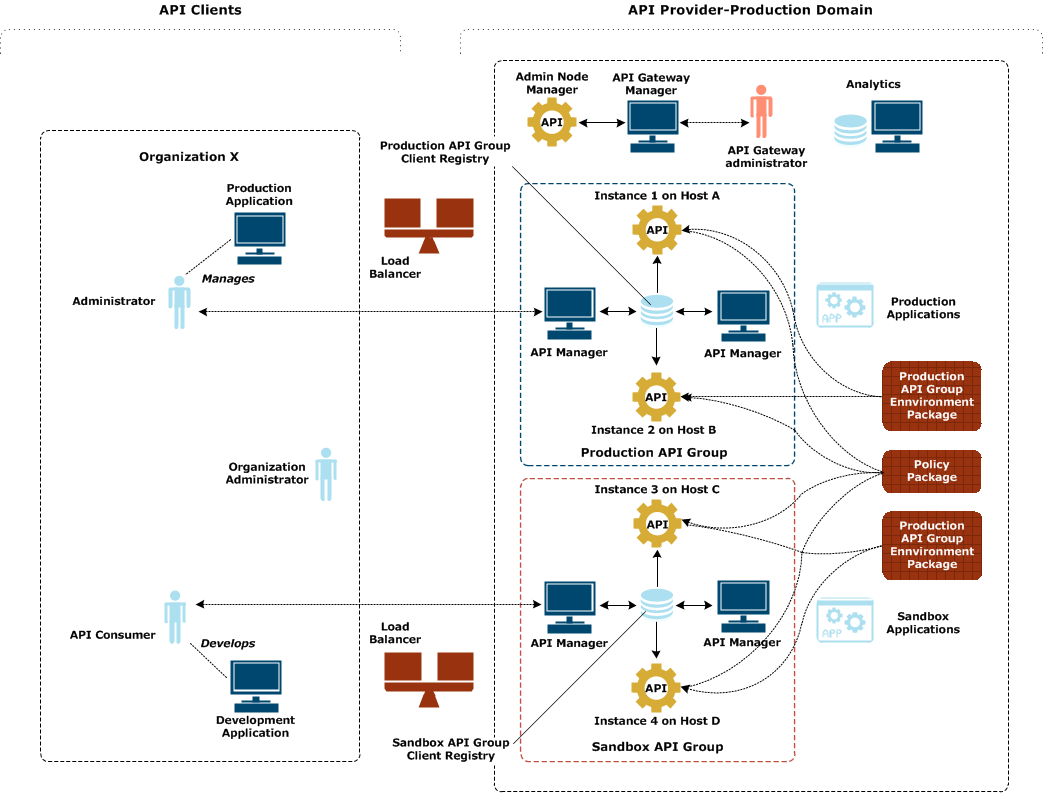 If your deployment does not use API Gateway policy-based configuration, you can promote APIs from a downstream environment using the API Manager export and import mechanism.

Onboard to production APIs 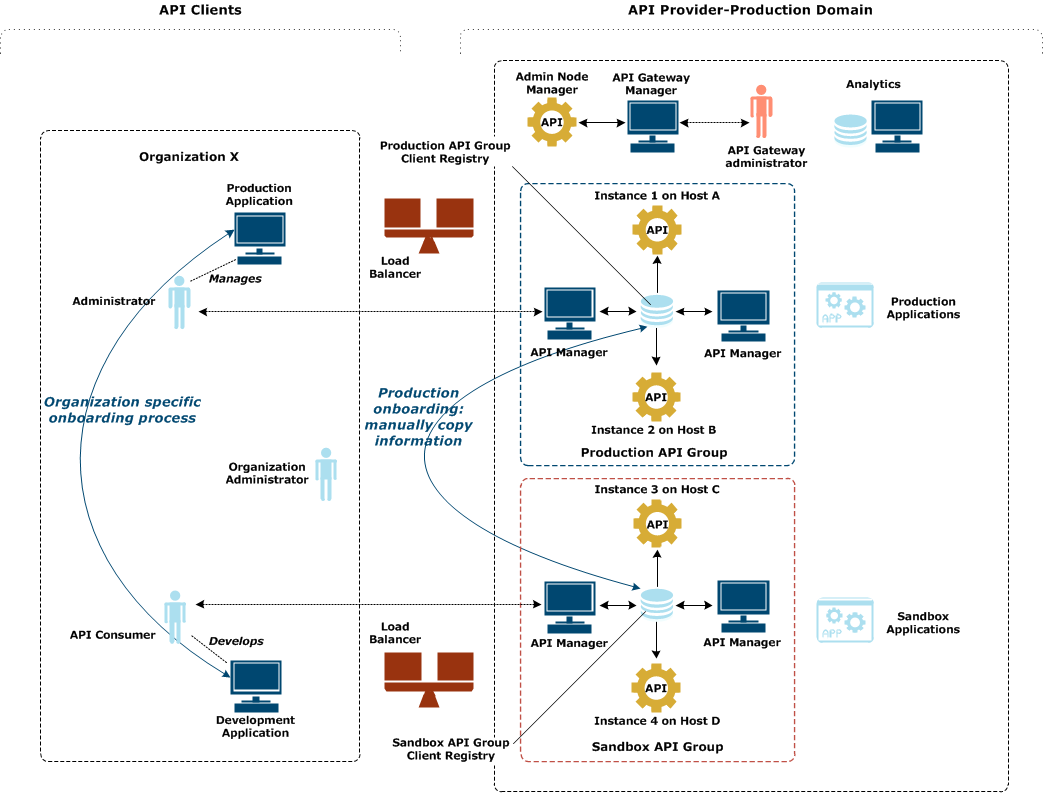 Production onboarding involves more than the technical task of onboarding information between API groups. Internal business processes, which are out of the scope of this document, also need to be considered. These include commercial or legal issues that need to be resolved when setting up a formal business partnership between an API Provider and API Client. For example, will the client be charged for API use, and what quotas are required to service the demand from the end users of client applications.

Each API Gateway instance connects to an external Apache Cassandra for default persistent data storage. This Cassandra database is used by features such as API Manager, API keys, and OAuth.