System administrators can configure High Availability (HA) in the API Gateway environment to ensure that there is no single of point of failure in the system. This helps to eliminate any potential system downtime in production environments. Typically, the API Gateway platform is deployed in the Demilitarized Zone (DMZ) to provide an additional layer of security for your back-end systems.

The following diagram shows an overview of an API Gateway platform running in an HA production environment:

The architecture shown in the diagram is described as follows:

For simplicity, the diagram shows two gateway instances only. However, for a resilient HA system, a minimum of at least two active gateway instances at any time, with a third and fourth in passive mode, is recommended.

The health check returns a simple <status>ok</status> message when successful. In this way, if one gateway instance becomes unavailable, the load balancer can route traffic to an alternative gateway instance.

In addition, API Gateway can also act as load balancer on the outbound connection to the back-end APIs. For more details, see Remote Hosts.

API Gateway supports integration with a wide range of third-party Java Message System (JMS) products. For example, these include the following:

API Gateway can act as a JMS client (for example, polling messages from third-party JMS products or sending message to them). For details on configuring the gateway client connections to JMS systems, see the API Gateway Policy Developer Guide. For details on configuring HA in supported third-party JMS systems, see the user documentation available from your JMS provider.

When using FTP protocols, the gateway writes to a specified directory in your filesystem. In HA environments, when the uploaded data is required for subsequent processing, you should ensure that the filesystem is shared across your API Gateway instances—for example, using Storage Area Network (SAN) or Network File System (NFSv4).

You can use the Remote Host Settings in Policy Studio to configure how API Gateway connects to a specific external server or routing destination. For example, typical use cases for configuring Remote Hosts with the gateway are as follows:

In an HA production environment, caching is replicated between each gateway instance using a distributed caching system. In this scenario, each gateway has its own local copy of the cache, but registers a cache event listener that replicates messages to the caches on other gateway instances. This enables the put, remove, expiry, and delete events on a single cache to be replicated across all other caches.

You can use External Connections settings in Policy Studio to configure how the gateway connects to specific external third-party systems. For example, this includes connections such as the following:

When configuring connections to server hosts, it is recommended that you specify server host names instead of IP addresses, which are less stable and are subject to change in a Domain Name System (DNS) environment.

All nodes in a Cassandra cluster must run on the same operating system.

API Gateway provides an embedded Apache ActiveMQ broker in each gateway instance. In a HA production environment, multiple ActiveMQ brokers can work together as a network of brokers in a group of API Gateways. This requires setting up a shared directory that is accessible from all gateway instances—for example, using Storage Area Network (SAN) or Network File System (NFSv4).

When setting up a shared directory, do not use OCFS2, NFSv3, or other software where exclusive file locks do not work reliably. For details, see Apache ActiveMQ Shared File System Master Slave.

In this shared network of ActiveMQ brokers, each API Gateway can start a local embedded ActiveMQ broker, which listens on a configured TCP port (61616 by default). This port is accessible from both the local gateway and remote clients using the load balancer.

For details on how to configure and manage embedded Apache ActiveMQ, see the following:

In this deployment pattern, all nodes in the DMZ run an Admin Node Manager in active/active mode. For example: 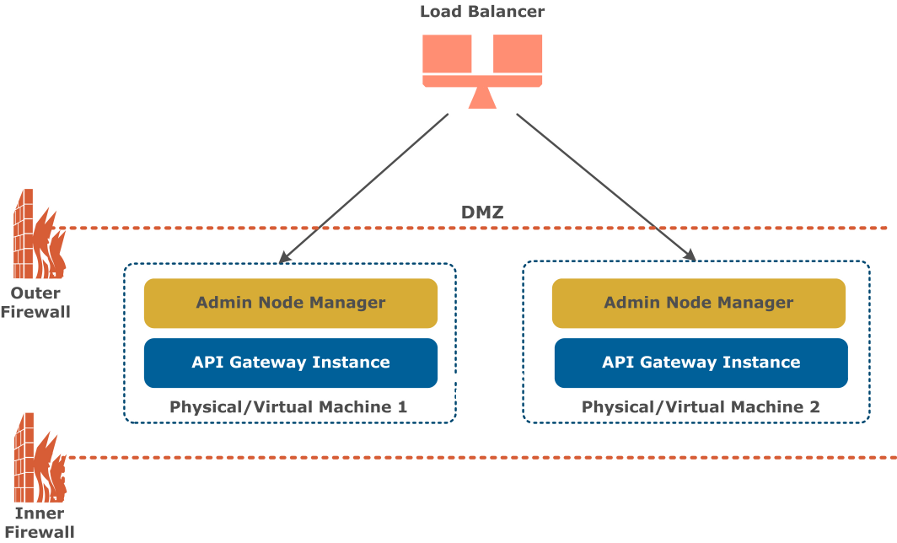 Multiple gateway instances are deployed on separate nodes in the DMZ, and all nodes can communicate with each other. Each node runs an Admin Node Manager in an active/active configuration, and there are no Node Managers. This means that the API Gateway management infrastructure is deployed in the DMZ.

In this deployment pattern, only nodes behind the internal firewall run Admin Node Managers in active/active mode. For example: 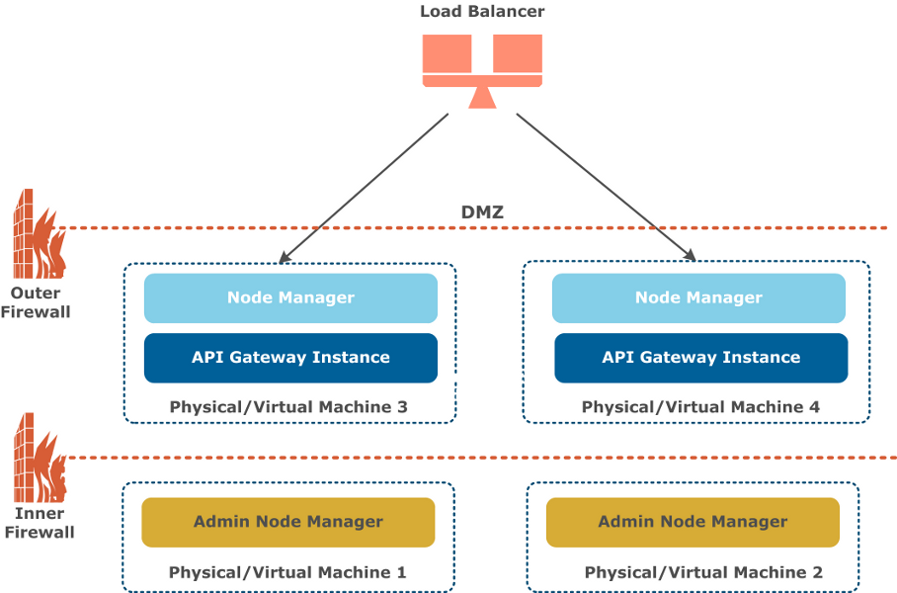 In this deployment pattern, all nodes in the DMZ run an Admin Node Manager in active/active mode. For example: 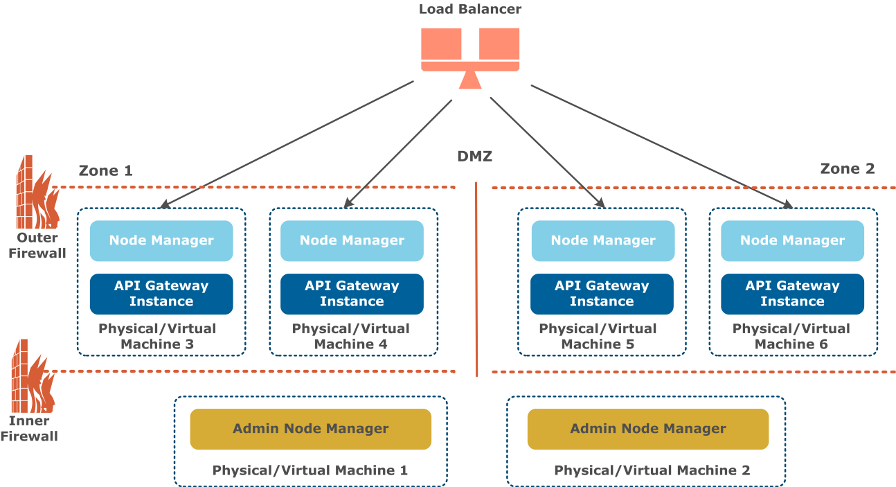 This deployment pattern is a refinement of scenario 2. The DMZ is divided into multiple zones with no inter-zone communication. Multiple gateway instances are deployed on separate nodes in each zone, and all nodes in the zone can communicate with each other.