Learn how to integrate the API management solution into a pipeline.

These days, the speed at which you can bring new products to market plays an enormous role in your company’s success. In the software environment, an integration pipeline is typically used to compile, test, and deploy the software. APIs are no exception and should be deployed in the same way, if necessary even parallel to the application that provides the API.

In addition to the speed advantage, the integration of Amplify API Management into an integration pipeline brings several benefits:

To integrate Amplify API Management, two deployment artifacts must be considered and deployed in separate pipelines:

Different deployment workflows are required for both approaches.

Policy developers develop policies with the help of Policy Studio, for example to realize security or integration use cases. The starting point is a checked-out policy configuration project, which is opened and edited with Policy Studio. After editing, the changes are checked back in, for example using Git. This enables integration into a CI/CD pipeline.

For deployment, the policy file and the corresponding environment file are merged to form the fed file, which is then deployed to the API Gateways.

The Amplify API Management solution provides predeployment scripts that you can use in an integration pipeline.

Instead of deploying policy and environment files directly from the version management system, it is best to build release packages that are stored in a release repository. This allows auditing, simple rollbacks, and the maintenance of dependencies.

A powerful framework for deploying policy configurations based on Maven is available at Maven Plugin for API Gateway Policy Development on GitHub.

The goal is for an API developer to be able to automatically manage and deploy their own APIs in self-service mode. This means that the developer can work self-sufficiently and is not regularly dependent on other teams or persons, such as a CI/CD administrator or an API administrator.

The requirements for the process are as follows:

If you have a number of API developers working on different or even the same projects and repositories, they should be able to control the deployment pipeline of their APIs independently, at least in the development stage before the API package for higher stages is released.

The following diagram shows the process for the development without staging concept in a simplified way.

It is best practice to create packages, artifacts, or some kind of releases for software projects. These artifacts are managed by repositories (for example, Nexus, JFrog Artifactory) and used to share assets between teams, and these artifacts are deployed to the target system. This provides several benefits, such as version auditing, segregation of concerns, rollbacks to a previous version, and the ability to establish CI/CD gates. It is best to use the same approach for promoting and deploying APIs and policies into all different API management stages.

The API developer or service provider expects the flexibility to code, deploy, and test frequently until they are satisfied with their code and are ready to create a release package. The following diagram shows an example process for the API developer.

In this process it might be more efficient to use the API Manager CLI apim-cli.

Promoting to all other stages

The process in all remaining stages is different to the development stage and is illustrated as follows. 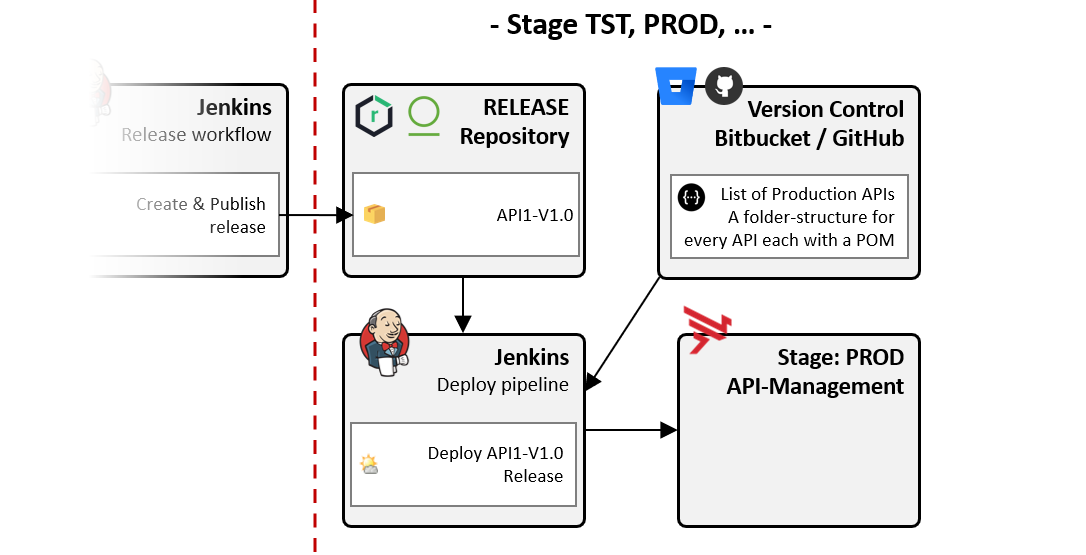 Watch this video to get an overview of how the process works.